Top priority is welfare of people: Oman's Minister of Information 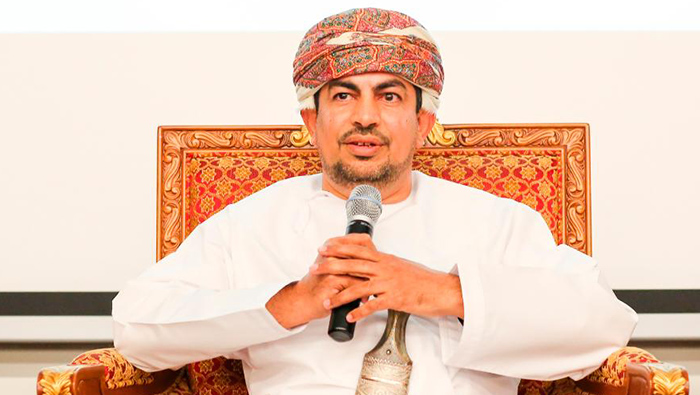 Muscat: “We are not a new nation ,” said Dr. Abdullah Nasser Al Harrasi, Minister of Information during an address to take stock of the progress made by the country over 51 years since the start of the Renaissance.

Speaking in the wake of Oman’s 51st National Day celebrations, the minister said that the country was founded on noble principles that aided in its development, and it is these tenets that also serve as guidance for His Majesty Sultan Haitham Bin Tarik to take the country forward.

“The dawn of the Renaissance in Oman started with political challenges faced by the late His Majesty Sultan Qaboos bin Said bin Taimour, but when he assumed power in 1970,” he said.

“The rein of the renewed Renaissance led by His Majesty Sultan Haitham Bin Tarik has also met challenges such as the COVID-19 pandemic, economic downturn, and tropical cyclone Shaheen,” explained the minister. “These challenges represented consecutive tests for the Omani citizen.”

The Minister of Information explained that the top priority for the country was the welfare of its citizens, and attempts to boost Oman’s economic rating internationally are guided by this objective.

A new media law is currently being drafted by the Ministry of Information. Oman’s balanced media has stemmed from the country’s cultural experience and history, which helped building a vision for the nation’s media, wisdom and reasonability.

“We are well aware of our history and our values from which we learn the truth,” explained Al Harrasi.

“A balanced media was established based on the various aspects of our civilisation and culture, when the late His Majesty Sultan Qaboos bin Said bin Taimour assumed power. Such values have been further cemented, as it is important for media to be both reliable, and reasonable in its judgement, according top priority to the country’s national interests.

“The media has to take into account the standard values and principles established throughout Oman’s history in order to properly addresses the causes and concerns of the youth,” he said.

“The concerns of youth, communicating with them, and according due attention and care to their employment has dominated each and every meeting with His Majesty Sultan Haitham Bin Tarik. His Majesty the Sultan has directed officials to spare no efforts for the development of the national economy and to create opportunities for the youth to contribute to nation building.”

A key effort currently being undertaken by Omani media is the promotion of what the country has available to foreign investors, so that they can contribute towards the country reaching its potential and harnessing its full capabilities.

What lies ahead for the Ministry of Information is aligning the voice of the media with the objectives of Vision 2040, Oman’s ambitious economic diversification and social investment plan, so that more coverage is provided to areas such as economy and investment. These will help make more investors aware of Oman, now that His Majesty the Sultan has pushed for the removal of many constraints towards foreign investors setting up operations in the country.

“In terms of regulation, we must make sure that media discourse reflects actual conditions, and keeps abreast of the latest developments,” explained Minister Abdullah Al Harrasi.

“The media must communicate facts in accordance with the values and ethics of the Omani people, besides presenting the future prospects of the country. The new media law is still undergoing discussion in order to cover and facilitate all forms of media work.”

“We developed the media law because media has developed at a global level and taken massive strides, especially when it comes to the use of technology,” he said.

“We have a strong presence in both traditional and social media, which prompts the need for new legislation. We have attempted to address this issue by making two public decisions last year, towards the regulation of electronic media.”