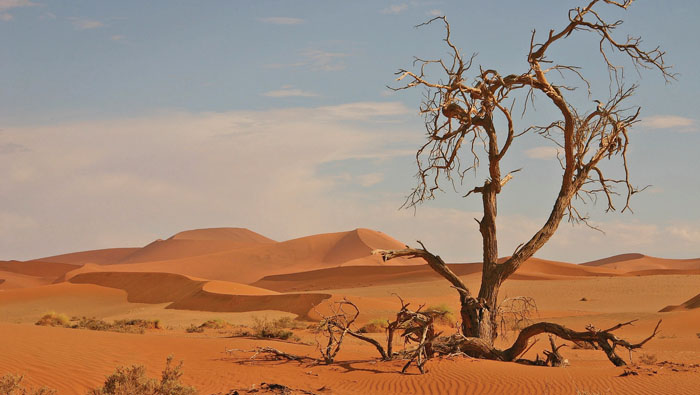 Muscat: Ministry of Environment and Climate Affairs has released a new film about desertification in the Sultanate, to educate residents and citizens and raise public awareness about land degradation, its causes, and effects.
“Of course, desertification has natural and human causes,” said Dr. Ahmed bin Abdullah Mahroos Al Saeeri, Director General of Environment and Climate Affairs in the Governorate of Dhofar.
“The natural causes include the decrease in rain over a long period of time. However, the truth is that human causes are a lot more damaging,” he added. “Among the human activities that cause desertification is the cutting of trees.”
The 20-minute clip also details Oman’s long history of combatting desertification.
As explained by researchers, desertification can lead to an increase in pests, resulting in even more trees being destroyed.
“There are primary and secondary pests,” said Dr. Mohammed bin Mussallem Hubays, Senior Plant Protection Specialist at the Ministry of Agriculture and Fisheries Wealth.
“Primary pests can be stopped before they get to trees. When do they become secondary pests? Primary pests change due to initiatives to fight them or when trees are weak.”
According to the United Nations, desertification refers to the persistent degradation of dryland ecosystems through unsustainable farming, mining, overgrazing, clear-cutting of land, and climate change.
The phenomenon occurs when the tree and plant cover that binds the soil is removed, and when trees and bushes are stripped away for fuel wood and timber or to clear land for cultivation. It can also be caused by intensive farming, which depletes the soil.
Oman’s initiatives to combat desertification include reforestation and tree regeneration projects, in addition to the planting of native plants.
The Sultanate is also a party to the UN Convention to Combat Desertification, having ratified the treaty on July 23, 1996. The Convention’s 196 parties work together to improve the living conditions of people in drylands, maintain and restore land and soil productivity, and mitigate the effects of drought.
Of the convention’s 196 parties, 169 countries have declared that they are affected by desertification. According to the UN, more than 1.5 billion people directly depend on land that is slowly being degraded.
Every year, 75 billion tonnes of fertile soil is lost to land degradation. Similarly, 12 million ha of land is lost every year to desertification and drought, an area that could produce 20 million tonnes of grain. Additionally, desertification and land degradation cause US$42 billion in lost earnings each year.
In 2007, the UN General Assembly declared 2010 to 2020 as “The United Nations Decade for Deserts and the Fight Against Desertification,” in a bid to mobilise global action against land degradation, promote sustainable management of land resources, and ensure the long-term ability of drylands to support the livelihoods of local populations.

Parts of Oman to see thunderstorms